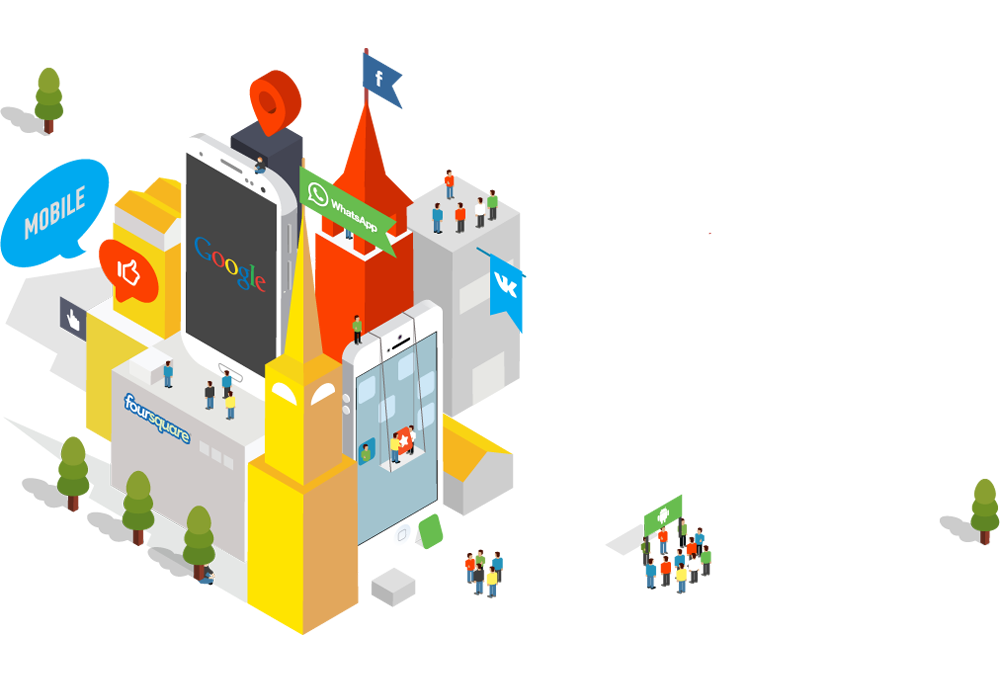 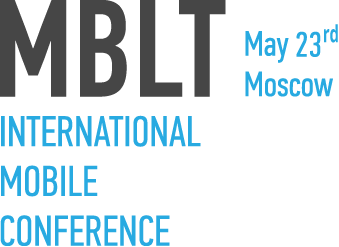 Results of the Conference

The conference gathered over 600 people and over 40 speakers from the leading IT companies of the UK, Germany, Poland, Portugal, Russia, France, Sweden and Japan. #MBLT14, official motto of which was "Inspired by innovations", covered such topics as mobile development, ads, smart gadgets, analytic, product services, etc.

The welcome word was said by CEO of company organiser e-Legion Roman Beloded:

"Who can turn fantasy into reality except us? To make it easier we organised this conference. We don’t want to teach you, we want to inspire you!"

Richard Pidgeon Vice-President Business Development EMEA of Distimo opened the fist section of the conference “Mobilization: insides”. He spoke about results of their studies about mobile apps. For example, Android and iOS devices are equally popular in Russia when in Asian countries Android devices are in higher demand. Next speaker was Dmitry Filippov who represented SPB TV company. Dmitry delivered presentation on user preferences for viewing video content. Most of mobile users watch short videos (30% watch less that 10 minute videos and 30% less that 30 minute videos). Global Business Development and Venturing Deutsche Telecom AG Joseph Noronha continued section with presentation about ways of winning with partners. Joseph showed many examples of how DT becomes bigger than just a mobile operator. For example, as the result of partnership with Spotify users of DT were able to get unlimited internet for listening music. 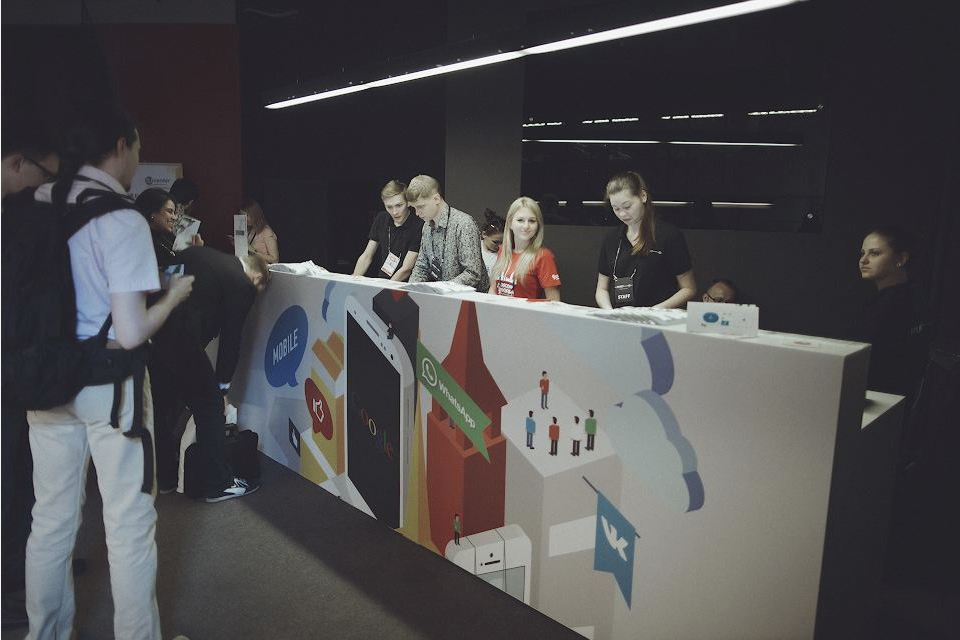 Lars Boilesen, CEO of Opera Software, couldn’t speak at the conference live but he recorded a video where he shared his view on constantly changing mobile world. “I think we will see very interesting development particularly around smart apps. Apps which will know what you are doing instead of you having to tell them what you want to do. Another thing I can see in future is development of apps which are based on big machinery, big data and sophisticated analytic which will in general help you to complete tasks. Think about Siri from Apple which actually could be a real personal assistant. For example before you go to bed you tell it “Siri, please book two tickets to San Francisco.” And then while you’re sleeping it will actually complete the task not only search for the information.”»

Lars’s speech was continued by interview with Senior Vice President of Products of Opera Krystian Kolondra and presentation from web evangelist of the company Vadim Makeev. Krystian spoke about future of the browser and path of company’s development. Then Krystian gave the word to Vadim to tell about Opera’s perpectives in mobile world and about new browser for iOS Coast by Opera.

Next section “Travel” was opened by Mobile Product Manager of Aviasales Ivan Kozlov. Ivan presented their methods of promoting the company. For example, by sponsoring translation of popular sitcoms by Kuraj Bambey, advertisement through non-traditional channels or implementing meta search of hotels. All these methods increased number of users and gain new ones. Also Ivan told the audience that Aviasales are becoming more mobile and give different bonuses to users of their mobile apps. Besides Ivan, there was presentation of Managing Director Russia & CIS of Airbnb Mikhail Konoplev in this section. Mikhail showed results of service’s growth (in the beginning of 2013 there were 5 million users of Airbnb that became 11 millions by January 2014) and talked about difficulties that company faces in Russia.

Next section was about product services and the first presentation was delivered by Product Evangelist of AT Internet Samia Abara. Samia presented several cases of mobile analytic in in a multi-device environment. Product manager of Chaos Control Dmitry Tarasov revealed his secrets of survival in a competitive environment. Later he together with CMO of Startup Germany and ex-PR of Wunderlist Sebastian Rumberg discussed PR of startups and how to get to European market. At the end of the section round table "Mobile First" took place. Representatives of Empatika, Aviasales, Soundcloud, LinguaLeo, Spotify and LitRes discussed the best platforms to develop for, hints of app store optimisation and to what you should pay attention when developing the app.

After the lunch conference was continued by Ivan Kozlov and founder of confestival MLOVE Harald Neidhardt. They played tickets to the confestival and flight to Berlin among the audience. Then representatives of Opera Mediaworks, Facebook, Mail.ru and Criteo gathered on stage for discussing mobile ads. Moderator of the discussion was Mobio’s founder ALexey Pisarevsky. Experts spoke about the most effective channels for mobile ads, usage of cross-device marketing and RTB.

Product owner of Spotify David Osterdahl with his presentation about lessons of mobile growth opened the next section about social apps. Then Head of API Department of Yandex.Money Dmitry Melnickov launched new product for mobile payments. He was followed be Kohta Fujii LINE’s Russia Business Development Manager who spoke about results of LINE’s launch in Russia and statistics of app’s users all over the world. The section was closed by Soundcloud’s Growth mobile manager Andy Carvell who pointed out ways of gaining new users.

The last section of the conference was about Wearable gadgets and Internet of things. Experts from Linkо, MLOVE, Kwamecorp, Samsung and Dentsu spoke about the future of our world, showed possible iPhone 2020 which will be implemented in human’s body and presented a prototype of smart bracelet the Bond which consists of several modules each with its own function like watches, NFC cards, walkman, car keys, and so on. 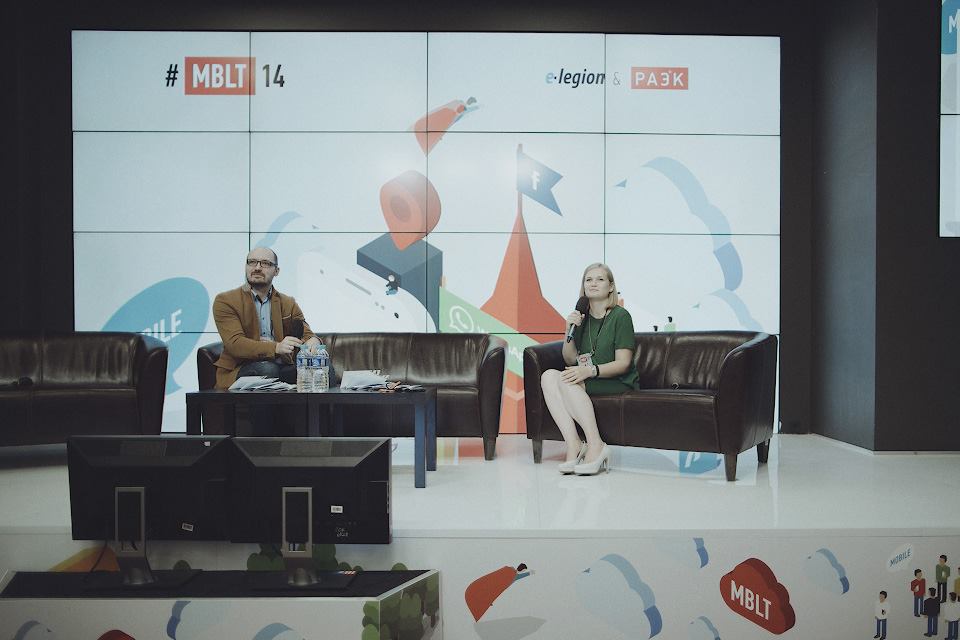 Besides programme in the main hall there were presentations in the 2nd room. Olga Alexandrova-Myasina from ccTLD.RU spoke about different IDN, founder of Addinapp.ru Dmitry Pluyshevsky revealed their ways of earning one million on ads having 50k MAU and not to destroy the app, then Dmitry Maximov from Comindware told how mobile devices are changing the workplace. One more round table took place on the conference. Speakers from App Annie, Rambler&Co, Goodwin, Avito, laModa and Alpha Bank discussed m-commerce. After the lunch Boris Korolev from SlickJump delivered presentation about changing users’ behaviour. Anna-Maria Treneva from Facebook told about mobile apps promotion. The parallel programme was closed by workshop about how to launch Russian startup in Europe by Inna Zaytchenko from Zenna Apps and Sebatian Rumberg from Startup Germany.

Several activities took place during the conference. Organisers of contest MDJam announced the best mobile developers’ websites. First three place were taken by e-Legion, Luy Ko and Hyperboloid. Also participants could enterntain themselves by taking part in AR competition from Aviasales (the winner got the Pebble watches) and asking curious questions for which they could get branded t-shirts. To make navigation through the programme easier organisers developed mobile app where users could find info about speakers, organisers and schedule.